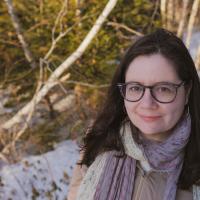 A glosa is a poem that organizes itself around four lines borrowed from another poem. A form invented in Spain in the fifteenth century, the glosa begins with the borrowed four lines set off as an epigraph. The poet then writes four stanzas of ten lines each, with each stanza ending on a line from the epigraph (stanza 1 ends with line 1 of the quoted text, stanza 2 with line 2, etc.). In this lesson, students will learn the form of the glosa, see an example of a bilingual glosa, and write their own glosas using four-line quotations of poems in another language (e.g., they write English-language poems in response to a four-line quotation from a French poem).

In this lesson, students will have opportunities to:

To teach this lesson, you will need: